Majority of Canadians can’t afford to retire: Conference Board report 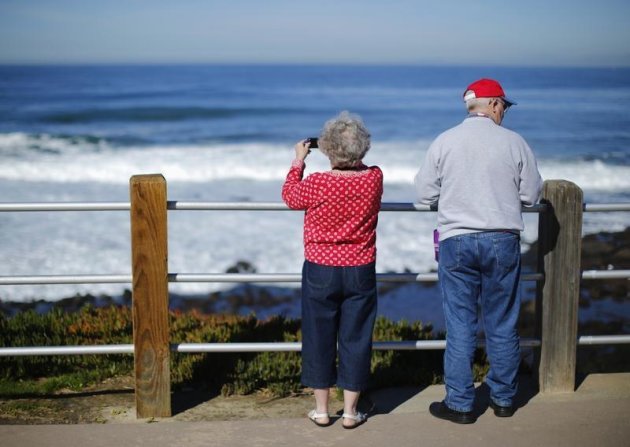 Reuters – A retired couple take in the ocean during a visit to the beach in La Jolla, California January 8, 2013

A majority of working age Canadians in a recent survey said they did not believe they were saving enough money to sustain them through retirement.

About 60 per cent of respondents, including those in the 55- to 64-year-old age group, indicated they have not saved enough for a comfortable retirement, according to the report, which was analyzed by the Conference Board of Canada.

Yet they are saving, with about 60 per cent putting money aside for retirement, mainly through RRSPs and TFSAs, according to A Survey of Non-retirees and Retirees in Canada.

The research, conducted in June by Opinion Search, involved an online panel of 1,656 Canadians aged 18 years and over, adjusted to represent various groups by age, region and gender.”

The average age respondents chose for their projected retirement was 63.2 years old. But one third said they were uncertain when they would retire and about 19 per cent said they thought they’d never retire.

Those approaching retirement age or already retired reported adjusting their expectations over when and how they would retire.

More than one in five respondents decided to retire later than they’d initially planned, with older workers estimating their exit date at 65.6 years old.

Lead researcher Judith MacBride-King said the high level of pessimism about being able to afford retirement among older workers may reflect a more realistic attitude towards needs in retirement.

“The closer you get, the more worried you become,” she said in an interview with CBC News.

MacBride-King said she was encouraged by the good proportion of younger Canadians who said they were already saving for retirement.

But she believes the research highlights a widespread lack of financial literacy among Canadians.

“A lot of people don’t know how much money they need to retire. They don’t even have a good idea of how much they will get from public pensions such as the CPP or QPP,” she said.

Of particular concern is the lack of savings or confidence in a retirement plan among women and those with lower levels of education or household income.

The lack of literacy among women may be a reflection of women being more critical of their own savings habits and less confident about money than male respondents, MacBride-King said, but it also shows that special attention should be paid to educating women about money.

About 40 per cent of survey respondents believed their employer should be educating fellow employees about financial planning and retirement savings.

Employers concerned about health of plans

A survey of employers done at the same time found half of them believe they have some responsibility to help employees plan for retirement. The employer’s survey has a very small response rate and should not be considered representative of all companies.

But it did highlight a general concern among employers, including public sector employers, about the long-term sustainability of their defined benefit pension plans.

It also showed many employers are trying to educate their employees with workshops and educational sessions, but with little success.

“Employers say how difficult it is getting people to show up,” MacBride-King said.